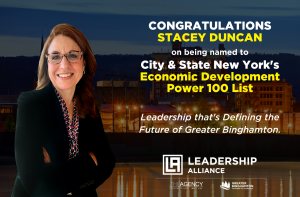 “If there’s one thing Democrats and Republicans can agree on in today’s sharply divided political climate, it’s the need for sustained economic growth. Americans are grappling with soaring inflation, and central bankers are ratcheting up interest rates to curtail rising prices – while hoping to avoid a recession as a result. Meanwhile, pocketbook issues that eroded support for the party in power in Washington were a key factor on Election Day.

Indeed, there’s plenty of debate about how to go about boosting economic growth. Should governments subsidize sectors like green energy, life sciences or technology – and can manufacturing make a comeback in a globalized economy that has struggled through a pandemic and war in recent years? What investments should be made to the state’s infrastructure – from public transit to high-speed broadband – and in the state’s workforce? Can city and state officials do more to cut red tape?

City & State’s Economic Development Power 100 identifies the top government officials, CEOs, heads of business groups and trade associations, advocates of small businesses and minority- and women-owned enterprises, and many other individuals who are aiming to answer these questions as they seek to drive job creation all across New York.” [Introduction from City & State New York Economic Development Power 100]

Stacey Duncan is the CEO of the Leadership Alliance, the strategic partnership between the Broome County Industrial Development Agency/Local Development Corporation & the Greater Binghamton Chamber of Commerce. In this role, Stacey serves as the chief executive of both organizations, directing the organizations’ efforts to pursue economic and community development projects for the benefit of all residents of Broome County. This includes the implementation of the organization's strategic plan, business retention and expansion efforts, talent attraction, and the pursuit of new and innovative initiatives to enhance business development in Broome County, NY. Since taking on her role in 2019, Stacey has championed nearly $900 million in new investments through exciting projects such as the Oakdale Commons Redevelopment, Bluestone Wind Farm, United Health Services Wilson Campus Expansion, and the revitalization of the Endicott-Johnson Victory Building.

Stacey also serves on a number of private and non-profit boards, including the New York State Economic Development Council, the Excellus Regional Health Advisory Board, the Conrad & Virginia Klee Foundation, the Roberson Museum & Science Center, and is a past advisor for George Washington University’s Women in Leadership Advisory Council.