Development In the News this Week: Feb 24 - March 2 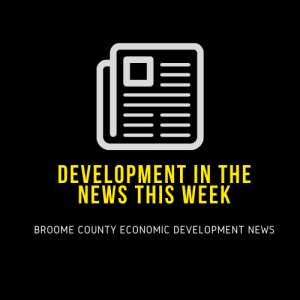 Broome County is currently undergoing a period of great economic growth and strong business development. At The Agency, we believe part of our job is keeping the residents of Broome County informed. For this reason, we are happy to be starting our weekly news series, Development in the News this Week. The Agency will post weekly news updates featuring links to key articles pertaining to economic development in Broome County. Economic development is a conversation which can only truly happen when all parties are in the know.

Development in the News this Week: Feb 24 - March 2

February 24 "Vestal housing project near Bunn Hill, Jenson Road draws opposition" Press & Sun - Jeff Platsky
Landmark Properties, a firm known for their work in student housing, is looking to develop a residential housing project on a 43-acre land parcel between Bunn Hill Road and Jensen Road. Landmark hopes to satisfy the needs of quality affordable housing near major employers such as Binghamton University through providing approximately 161 market rate units. Residents in the area have concerns about what will happen if this new housing project gets approved.

February 26 "New York's hemp bust: Acres of crops unsold, frustrating farmers in untested market" Press & Sun - Jeff Platsky
New York hemp farmers are feeling frustrated this season as they are faced with an abundance of product with no buyer. Many are worried this projected hemp boom was instead a bust, but leaders in industrial hemp still have hope that hemp will be a lucrative business for Broome County, such as Assemblywoman Donna Lupardo believes this is part of the growing pains that comes with a new industry. As more processors and buyers enter the market, as better supply-chain infrastructure is developed alongside that, and with more clear regulations by the FDA, the hemp boom won't be a bust after all.

February 26 "BAE Systems providin power systems for up to 600 buses in Ireland" CNYBJ - Eric Reinhardt
The BAE facility in Endicott has been contracted to manufacture up to 600 electric power and propulsion systems for a new fleet of buses in Ireland. The initial order was for 100 series-ER (electric range) systems to help Ireland get closer to accomplishing its zero emissions goal. When the engine is not running the buses will switch to battery power to prevent wasteful exhaust emissions. BAE has more than 200 system-ER busses running around the globe and employs more than 1,300 in their Endicott facility.

March 2 "Binghamton University expands Johnson City real estate holdings" Press & Sun - Jeff Platsky
Binghamton University has acquired seven properites in Johnson City located near their Health Sciences satellite campus between October and January this past year. Among these aquisitions are two residental properties as Binghamton hopes to contribute to the revilatization of the Johnson City area through developing a cutting edge medical research center with the appropriate housing to support the increase in talent attraction to the region. Representatives from the University have noted that this is not the end of aquiring properities in the Johnson City area as they are looking at other development opportunities in the area.