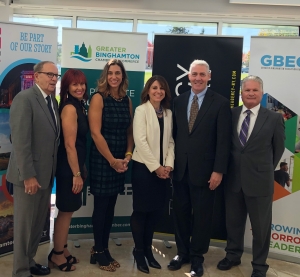 BINGHAMTON, NY – Peter Newman, regional president of M&T Bank and Chairman of the Greater Binghamton Chamber of Commerce, was joined by fellow Chamber Board members today to announce Stacey Duncan will serve as the new president & CEO of the Greater Binghamton Chamber of Commerce. The organization has been without a chief executive since July.  At the same time, the Chamber has announced Amy Shaw has been promoted to the newly created position of Chief Operating Officer and Judi Hess has been promoted to Senior Vice President for Visit Binghamton and The Welcome Center.

This announcement signals the formation of a new strategic leadership alliance between the Chamber and The Agency, as Duncan will retain the role of Executive Director for The Agency and serve as chief executive of the Chamber.

In commenting on the transition, Newman stated, “This is a great day for the members of our Chamber of Commerce and for our community, as the Greater Binghamton Chamber of Commerce and The Agency demonstrate our commitment to effective and efficient leadership.  Stacey is a highly respected and talented leader within our business community who has demonstrated an ability to lead collaborative efforts.  We are extremely fortunate to have her leading The Chamber and The Agency.”

Through this leadership alliance, Duncan will serve as the administrative link between the two Boards of Directors, which will remain independent and autonomous. This is not a merger of The Greater Binghamton Chamber of Commerce and The Agency.  Each organization will remain a separate corporation with its own governing board.  Both organizations felt that the timing was right for a stronger strategic partnership among the two organizations.

“I am especially thrilled and honored to be chosen to lead this new and dynamic alliance and commend both Boards for having this vision,” said Duncan. “My main objective will be to articulate the shared missions and value that these organizations bring to our community and to position Broome County as a more powerful player in economic development outside of Broome. We are so much stronger together and I am eager to get started with both of these outstanding teams.”

The Agency is Broome’s lead economic development organization that has, over the last five years taken a strategic and proactive approach to promote and position Broome for new economic investment and to address critical community development issues.

The Greater Binghamton Chamber of Commerce is Broome’s lead business development organization and has, over the last several years taken a strategic and proactive approach to retaining and attracting young professionals, addressing costly business regulations and promoting the area as a premier tourism destination.

“Given the strength and reputation of the organizations, the shared vision for a vibrant community, and the people responsible for running the business, I’m confident this bold and progressive move will be successful,” said John Bernardo, Chairman of the Board of Directors of The Agency Broome County IDA/LDC. As Chief Operating Officer, Amy Shaw will manage the day-to-day operations of the Chamber and its programming. Judi Hess, will continue to drive the regional tourism efforts through Visit Binghamton. Hess will also assume oversight of the Southern Tier Welcome Center on Interstate 81.

Duncan feels that this realignment will be critical to success. “I have had the good fortune of working with and knowing Amy and Judi for more than a decade,” Duncan said. “They are outstanding women, both personally and professionally, and I look forward to working with them again.”

Duncan is not a stranger to chamber of commerce work. Duncan was the Government Relations Manager from 1998- 2000 when she left to join the late Jeffrey P. Kraham administration. Duncan resumed that role in 2009 and held until 2014 when she left to serve as the first executive director of the Broome County Land Bank. Duncan assumed the deputy director role at The Agency in 2015 and was selected by the Board to become its current executive director in April 2019.

Duncan will begin work as the President & CEO on November 1.